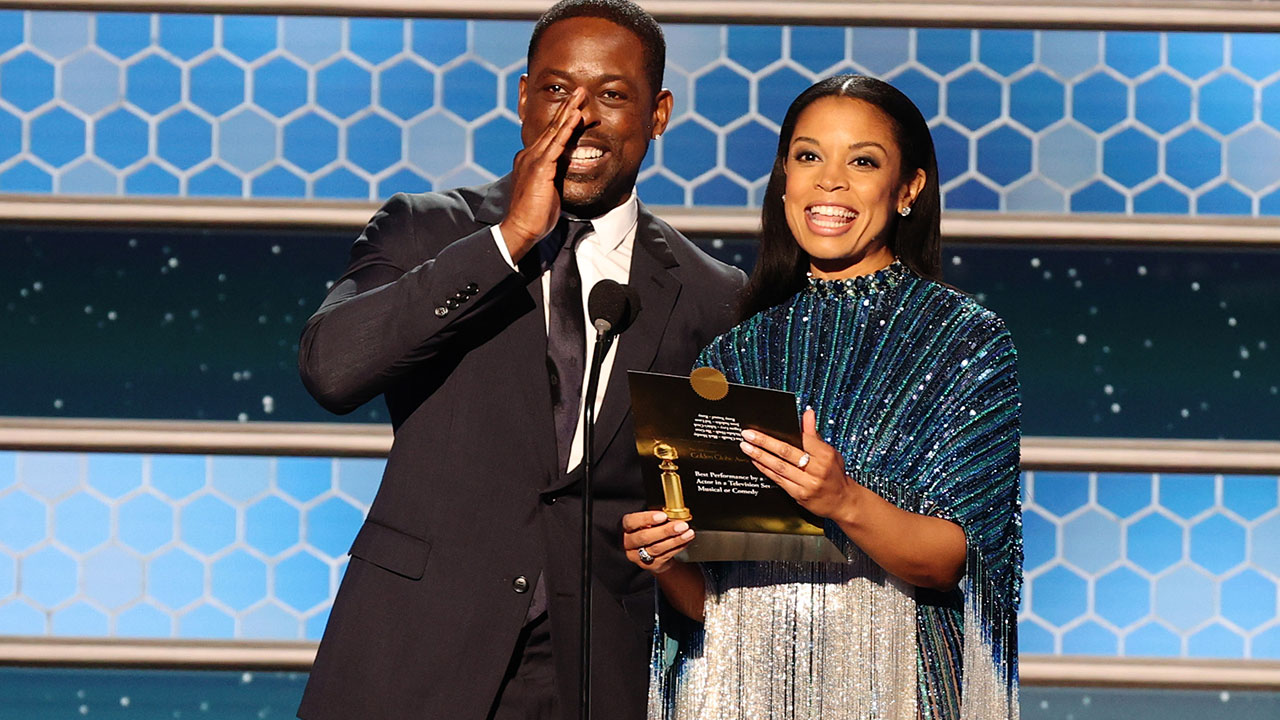 The Golden Globes are in trouble. Even if you weren’t fully aware of the criticism they’re currently facing, watching just a few minutes of last night’s awkward, jilted ceremony may have tipped you off that something was amiss.

It started, as it so often does, when the nominations were announced earlier this year and the major categories were dominated by white celebs. Overwhelming whiteness at a Hollywood awards show is no longer a surprise. What was shocking, however, was the lack of recognition for projects like HBO’s buzzy Lovecraft Country, which was nominated for Best Drama Series while its Black cast was completely shut out; Spike Lee’s Da 5 Bloods was snubbed; and Michaela Coel’s revelatory, critically acclaimed I May Destroy You, which topped countless “best of” lists last year, was ignored entirely. And let’s not even get started on the two unearned nominations for everyone’s favourite hate-watch Emily In Paris.

Then, last week, the L.A. Times dropped a sweeping investigation accusing the HFPA, the Globes’ governing body, of widespread corruption and revealed an appalling lack of diversity among the group: Of the organization’s 80+ members, none are Black. Zero.

Read this next: Why Are Awards Shows Still So Damn White and Male?

With all this in the background, there was an underlying sense of tension during last night’s show. And while no one, except for maybe the HFPA, would actually claim anything that happened during the three-hour ceremony is a sign of a more inclusive future for the Golden Globes, some celebs did show up ready to call out the BS and demand more inclusivity.

Calls of #TimesUpGlobes started before the show

The public outcry actually started before the awards show with celebs sharing a message on social media starting last week. “Hollywood Foreign Press Association: Not a single Black member out of 87. #TimesUpGlobes,” read an image, which was first posted by Time’s Up, the Hollywood group formed in the wake of #MeToo. Pretty soon, a number of actors had shared the message as well: Sterling K. Brown, Shonda Rhimes, Mark Ruffalo, Kerry Washington, Tracee Ellis Ross, director Gina Prince-Bythewood and Jennifer Aniston are just a few of the names who reposted the image over the weekend.

Ellen Pompeo didn’t stop there. The outspoken Grey’s Anatomy star later posted an open letter on her Twitter account. “What we cannot do is leave this problem up to the Black community and all our communities of color to fix. This is not their problem, it’s ours,” she wrote. “I would kindly ask, all my white colleagues in this industry, an industry that we love and has granted us enormous privilege, to pull up, show up and get this issue resolved. Let’s show our Black colleagues that we care and are willing to do the work to right the wrongs we have created. Now is not a time to be silent.”

Ava DuVernay was also among the chorus of A-listers supporting the #TimesUpGlobes movement. The director, who also presented at last night’s ceremony, shared her own message on Twitter ahead of the awards. “To be clear, pressure applied to the Globes and its partners from now on isn’t about validation or shiny things from this particular group,” she wrote. “The truth that’s not often discussed is that awards play a part in the economic reality of Black filmmakers, artists of color and women creators in this business. Unfortunately, these shiny things matter to those who finance, greenlight, produce, distribute and market our projects.”

The flood of social media statements was so strong that the HFPA released one of their own before the ceremony: “We are fully committed to ensuring our membership is reflective of the communities around the world who love film, tv, and the artists inspiring and educating them. We understand that we need to bring in Black members, as well as members from other underrepresented backgrounds, and we will immediately work to implement an action plan to achieve these goals as soon as possible.”

BFFs Amy Poehler and Tina Fey returned to host the Globes from opposite coasts, with Fey coming in live from New York while Poehler was in L.A. They, of course, tackled the HFPA’s lack of diversity, joking at first before getting a bit more serious. “Everybody is, understandably, upset at the HFPA and their choices,” Poehler said. “Look, a lot of flashy garbage got nominated, but that happens, OK? That’s, like, their thing. But a number of Black actors and Black-led projects were overlooked.”

“We all know that award shows are stupid,” Fey continued. “But the point is, even with stupid things, inclusivity is important, and there are no Black members of the Hollywood Foreign Press. I realized, HFPA, maybe you guys didn’t get the memo because your workplace is the back booth of a French McDonald’s, but you’ve gotta change that. So, here’s to changing it.”

Read this next: To All the Boys: Always & Forever Is More than Just a Love Story—It’s an Ode to Female Friendship

Now, are Fey and Poehler the best women to make this statement? Maybe not. After all, we know, as DuVernay pointed out on Twitter, that awards matter, and they have plenty of their own. Some of their work, Fey’s in particular with 30 Rock and Unbreakable Kimmy Schmidt, has also been called out for its lack of diversity and depictions of race. But it was something that needed to be said, and it set the tone for the rest of the show.

The HFPA gave another lacklustre statement

The HFPA also decided to acknowledge their own lack of diversity on stage when three members came out and gave a short statement. (Seriously, it was less than a full minute.) “We recognize that we have our own work to do. Just like in film and television, Black representation is vital. We must have Black journalists in our organization,” they said. “We must ensure everyone gets a seat at our table. That means creating an environment is the norm, not an exception.”

Here’s the statement made by the Hollywood Foreign Press Association at tonight’s #GoldenGlobes. pic.twitter.com/3DFF8uexHg

It’s a pretty vague statement that doesn’t actually mean anything, let alone indicate what they’re going to do to address the racism that’s so embedded in their organization. Time’s Up President and CEO Tina Tchen issued her own statement in response to the HFPA: “Your stated version of change is cosmetic—find Black people. That is not a solution.”

Upon accepting the Best Comedy Series trophy for Schitt’s Creek, Dan Levy also called for the HFPA to do better during his brief speech. “This acknowledgement is a lovely vote of confidence in the messages Schitt’s Creek has come to stand for: the idea that inclusion can bring about growth and love to a community,” the Canadian said. “In the spirit of inclusion, I hope this time next year this ceremony reflects the true breadth and diversity of film and television being made today because there is so much more to be celebrated.”

Dan Levy dropping some truth about inclusion and urging the #GoldenGlobes do better at acknowledging diversity during his #SchittsCreek series win. pic.twitter.com/xyxgbT3sPz

Later on in the night, Borat star Sacha Baron Cohen also threw a jab at the organization during his acceptance speech for Best Actor in a Musical or Comedy, saying, “Thank you to the all-white Hollywood Foreign Press,” calling back to Natalie Portman saying “Here are the all-male nominees,” while presenting Best Director at the 2018 Globes. Guess not much has changed in three years….

Read this next: Schitt’s Creek and the Joy of Being Different

This Is Us Stars Sterling K. Brown and Susan Kelechi Watson had their own dig

The iconic Jane Fonda, who’s known as much for her activism as she is for her acting career at this point, received the prestigious Cecil B. DeMille Award, an honorary Globe that recognizes outstanding contributions in the industry. She used her short time on stage to talk about the recent projects created by people of colour that moved her. “Just this year, Nomadland helped me feel love for the wanderers among us and Minari opened my eyes to the experience of immigrants dealing with the realities of life in a new land,” she said. “And Judas and the Black Messiah, Small Axe, US vs. Billie Holiday, Ma Rainey, One Night in Miami and others have deepened my empathy for what being Black has meant. Ramy helped me feel what it means to be Muslim American. I May Destroy You has taught me to consider sexual violence in a whole new way.”

Fonda continued: “Stories: They really can change people. But there’s a story we’ve been afraid to see and hear about ourselves in this industry. A story about which voices we respect and elevate—and which we tune out. A story about who’s offered a seat at the table and who is kept out of the rooms where decisions are made.

“So let’s all of us—including all the groups that decide who gets hired and what gets made and who wins awards—let’s all of us make an effort to expand that tent so that everyone rises and everyone’s story has a chance to be seen and heard.”

Thankfully, the percentage of diverse winners last night’s ceremony was slightly better than the overall nominations. Nomadland director Chloé Zhao became the first Asian woman—and only the second-ever woman—to win Best Director; Daniel Kaluuya also won for Best Supporting Actor (Movies) for his role in Judas and the Black Messiah; John Boyega came out on top in the Best Supporting Actor (TV) category for Small Axe; Minari (which was another source of controversy for the HFPA) director Lee Isaac Chung accepted the film’s Best Foreign Language award; and Chadwick Boseman won a posthumous award for his work in Ma Rainey’s Black Bottom (with a moving acceptance speech given by his widow Taylor Simone Ledward). United States vs. Billie Holiday star Andra Day also made history with her surprise Best Actress in a Drama win—she’s only the second Black woman to take home the trophy in the category.