Growing up is hard as hell. It’s a truism we all live through, regardless of our particular circumstances—so it’s no wonder it’s the crux of so many of the on-screen stories we love. And now more than ever, we need those stories to relate to, to lift our spirits…and to give us some travel porn for when the pandemic finally lifts. These films also remind us that our friends are there—even if only through screens right now. To All The Boys: Always and Forever is the pandemic reprieve we all need, and it hits Netflix on February 12—just in time for Galentine’s Day.

While it’s certainly a love story, following the trials and tribulations of Lara Jean “LJ” Covey (Lana Condor) and Peter Kavinsky (Noah Centineo), the real heroes of Always & Forever are the women closest to LJ—her BFF Chris, played by Madeleine Arthur, and her little sister, Kitty, played by Anna Cathcart.

Read this next: Your Horoscope for 2021—What to Expect, and What to Leave Behind

Canadian stars Arthur, 23, and Cathcart, 17, have grown up with their characters over the last three years of filming the To All The Boys I’ve Loved Before series, based off the books by Jenny Han. As they’ve gone through their own coming-of-age experiences, from graduating high school and navigating typical struggles in the age of social media, so have the young women they play on screen.

We sat down with the two of them—via Zoom, of course—to chat the importance of strong female friendships, why social media isn’t that bad and the new age of romantic comedies.

While the plot centres on LJ and Peter grappling with the reality of a potential long-distance relationship, Chris and Kitty are a big part of the story. As LJ’s heart pulls her in two very different directions, she has two forces of nature by her side keeping her grounded.

“[The movie is] a representation of what a good friendship can be, when you have people to lean on through whatever you’re going through,” Arthur says. “That’s what you hope for any friendship; someone who is there for you, and there to challenge you, as well.” And challenge, she does, as a free-spirited Chris dead-set on label-free relationships and travelling instead of going to college—never once faltering as LJ’s closest confidant. 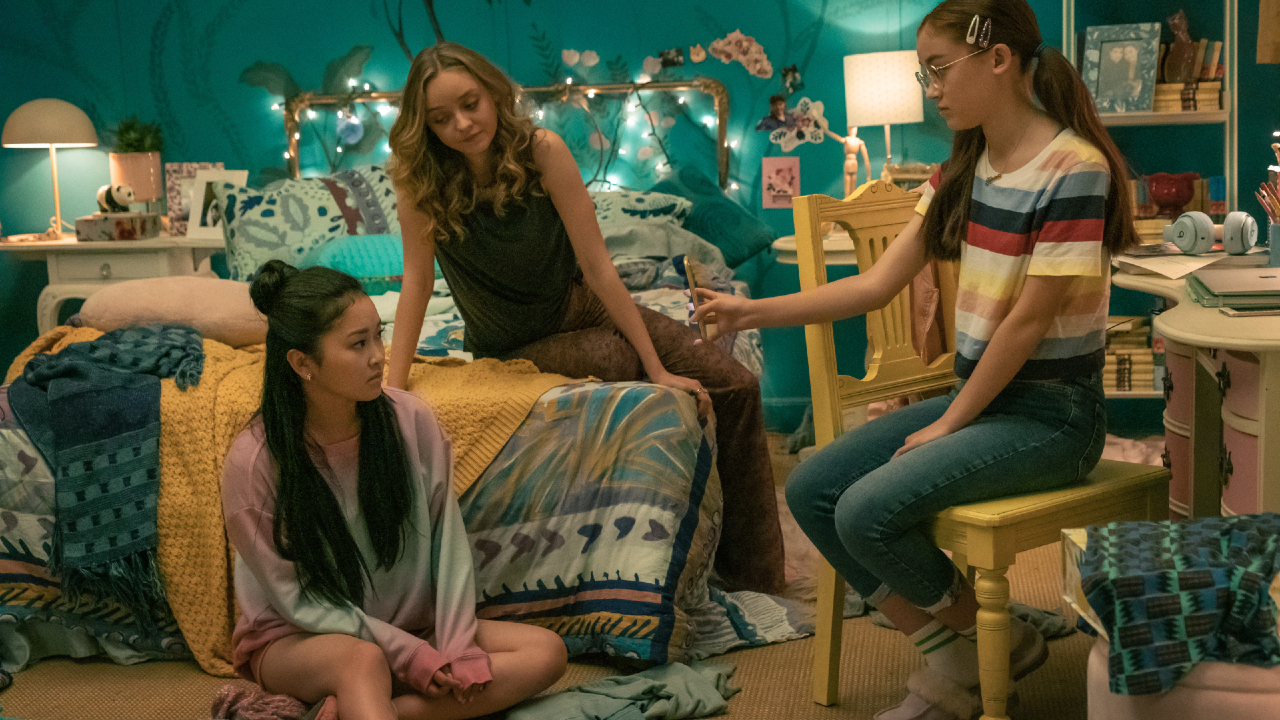 Meanwhile, as LJ’s younger sister, Kitty is finding her own identity separate from her. “At that age, it’s tough to be really confident and it’s an insecure time,” Cathcart says of her character. “But she knows who she is and she’s not afraid to show it.” Especially not to LJ. “It’s amazing for people to see, no matter what stage of life they’re at, characters like this to relate to.”

Anyone with siblings knows it’s tough to take advice from family. The way Kitty supports her sister, aside from just being there, is in the way she conducts herself as a strong-willed, defiant, take-no-BS young woman navigating her place in the world. We all need that one person to love us through it all—even with a little bit of grief that a sisterhood wouldn’t be a sisterhood without.

Throughout the three-film series, the young women undergo a style evolution that parallels their inner growth. As Chris comes into her own wild self, her outfits express it—bell bottoms, Blondie T-shirts and wide-brimmed hats project a retro easy-breezy vibe. “Chris walks to the beat of her own drum and uses clothes to help express herself,” Arthur says. “It shouldn’t be viewed as shallow. Fashion is a wonderful tool to express yourself…. She knows who she is, and she’s comfortable with that no matter what anyone else says.”

As middle-school Kitty finds her voice, she also discovers a love for “Feminist” pins and bold, colourful clothing, culminating in an epic baby-blue tuxedo moment in the last instalment of the series. “It was more powerful than just, ‘I don’t want to wear a dress,’” Cathcart says. “It was, ‘Oh, these are your expectations? I have to fit into someone else’s mold? I’m not here for that.’”

Social media platforms like Instagram and TikTok have been critiqued as toxic places that lower self-esteem and encourage unhealthy comparison. One scene sees LJ, having not yet heard back from her first-choice school, aimlessly scrolling college acceptance videos on Instagram. It’s a feeling anyone going through the same thing (or navigating any other life milestone) will relate to.

Read this next: Confronting Your Crush is Awkward. Trust, Janel Parrish Gets It.

“I’m graduating soon, and I’m thinking about next chapters and … stressing about applications,” Cathcart, who has 2.6 million followers on Instagram, says. “It’s cool to see a character who’s going through that as well. [We’re] not hiding that part. Everyone has times behind closed doors when they feel insecure.” 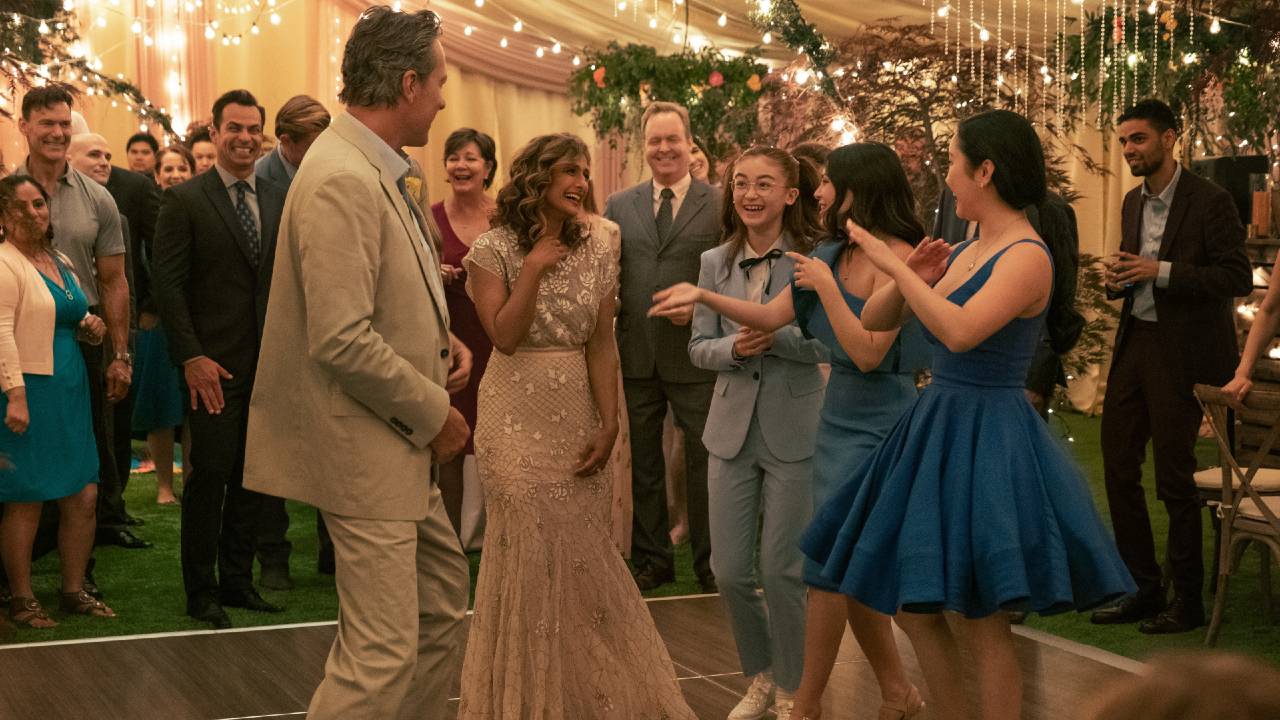 “You’re not alone. You’re not the only one scrolling through Instagram and having this reaction to what’s coming up,” Arthur adds. “It’s great that there’s a big conversation around having a healthy relationship with social media [and] learning how to keep a good mindset while using it.”

While the film was in production well before the pandemic hit, the long-distance theme rings especially true now as many of us—including Arthur and Cathcart, they both note—become more reliant than ever on the digital space for connection. In the film, Kitty experiences her first long-distance love with Dae, a boy she met while in South Korea, which is an experience she couldn’t have had without social media. LJ and Peter, while on a school trip to New York City, are able to virtually see the city together despite being placed in different tour groups. We get a glimpse into their future, too, in which they’re able to keep in touch while on different sides of the world.

The movie reminds us of the benefits of social media, and how way we connect now is different, sure, but it’s our collective reality and makes us all feel a little less alone.

The growing pains of becoming an adult are the same, but the traditional recipe of a romantic comedy—in which the woman must undergo a dramatic transformation to become loveable—doesn’t have to be. And the To All The Boys series is proof. Thank goodness for that, says Cathcart.

“[LJ] never had to have that classic rom-com makeover,” she says. “She didn’t have to change herself; she’s still the amazing person she was.”

Neither Chris nor Kitty experience this pressure to change, either, both walking to the beat of their own drums and learning what it means to be authentically themselves. They don’t slip into stereotyped best-friend or little-sister roles that ask them to fill an exaggerated version of themselves. Chris and Kitty are just Chris and Kitty—wild, authentic and whole-heartedly loveable.