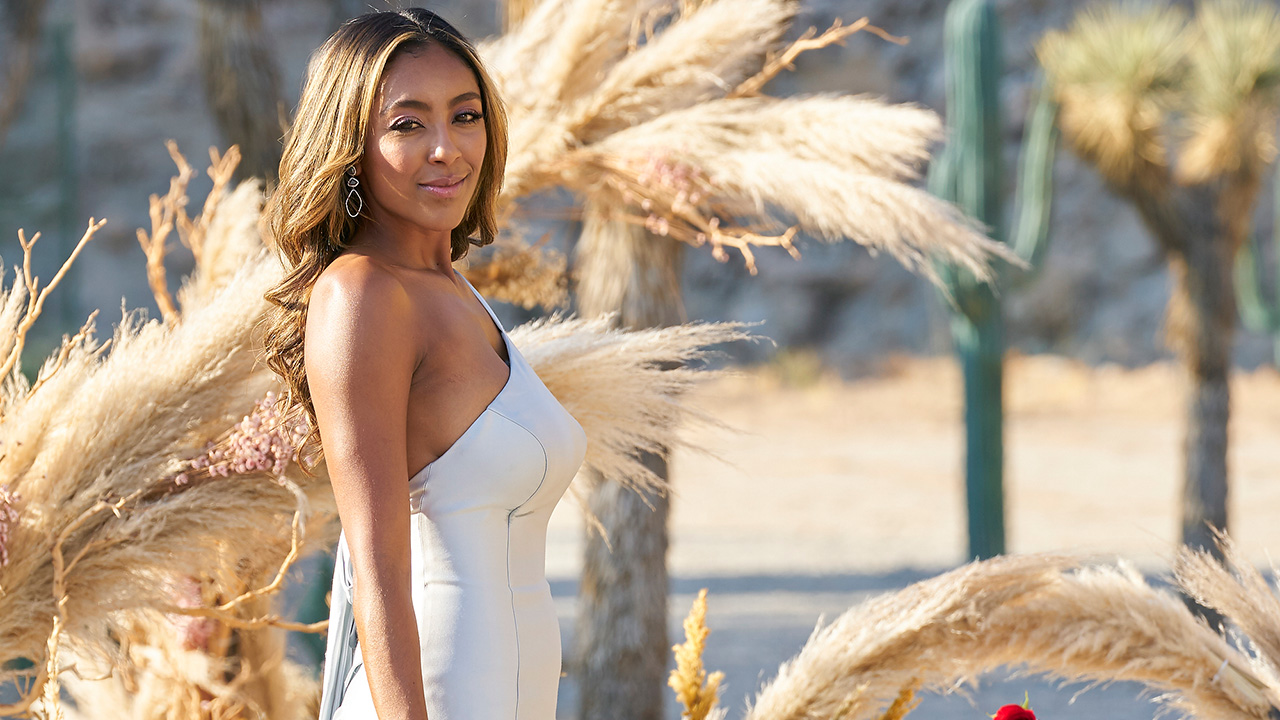 Is it possible to feel supremely satisfied and unsatisfied at the same time? That’s how last night’s finale left me. I wrote in my notes, “The Good: Tayshia and Zac. The Bad: Everything else.” Other than Zayshia (which, granted, is the most important part), there were many, many issues with this finale. I have so many “bad” notes I have to resort to bullet form. That’s how bad we’re talking.

The Bad #1: This ending felt rushed, all over the place and incomplete. I could not believe the show would leave us hanging without an After The Final Rose segment, or any kind of update at all. (I love Tell Alls but would have gladly traded in this season’s MTA for even a brief ATFR segment.) There was no Happy Couples Weekend montage, and not even a few phone photos of them together. We’re constantly reminded that this is a show about “love”—it’s love, love, love above all else. Anything for Tayshia to “find love,” everyone’s on their journey for it. Yet, when we FINALLY get that love story (and one for the ages!), Tayshia and Zac had barely taken a few steps in their makeshift “Just Engaged” taxi when our grand finale—the happy ending we waited many months for—cut straight to an extended preview of Matt James’s Bachelor season. With all due respect, dear Powers That Be, most people watching this season are also going to be watching on January 4. I actually found the dismissiveness of this ending almost offensive, as I have a hard time believing they’d cut short a Bachelor’s finale in favour of inserting an extended ad of a Bachelorette season. I know these are strange times and there are many safety concerns surrounding making something like After The Final Rose happen. But frankly, even selfie videos of them would have sufficed. This ending was an abomination.

Read this next: Here Are Some of the Women Competing for Bachelor Matt James’s Heart

The Bad #2: The conversation where Tayshia sent Ivan home was so half-baked, I wanted to scream. Finally, we have two people on this show discussing a very relatable, real-world relationship concern—opposing religious views—and we weren’t shown any context whatsoever. I understand Tayshia and Ivan touched on religion during their Fantasy Suite date, sans cameras, but this is what Pick-ups are for. Now, personally, I think Tayshia needed a reason to end a relationship she intended to end anyway. I saw their clashing views on religion as more of an “out” for her than some shocking catalyst. But what especially bothered me here was how it was suggested this topic was something Ivan should have brought up sooner. In fact, when Ivan apologized for not mentioning it earlier, Tayshia said nothing, her silence speaking volumes. I do not think any specific religion should be considered the default, and I can’t stand it when this show makes it seem that way. In fact, if religion is a dealbreaker for you (which is totally understandable, and as it seems to be for Tayshia), that’s on YOU to bring up early on and to make a hard requirement. I loathed how the onus was subtly placed on Ivan in this scene, when it really was Tayshia’s dealbreaker, not his.

Even this much is me filling in the blanks left by this scene, piecing together what I imagine this conversation was about. Ivan was a major player this season, and after us being convinced for weeks why they would be great for one another, it would have been nice to have ACTUALLY HEARD what was being discussed when things ended. It felt like we got the beginning and the end of this conversation only, with the middle conspicuously missing. Considering this is a show (supposedly) about love and partnership, not doing the utmost to address a very relevant and realistic relationship issue (arguably the most believable relationship issue this show has ever shown us!) was a massive missed opportunity.

The Bad #3: Ben’s entire return. I actually have no issue with Ben coming back—you could argue this was the most successful “return” in this show’s history—and I get his desire to leave no stone unturned. It seemed Tayshia (rightfully) regretted kissing Ben the night he returned, given she very likely knew at this point she wasn’t picking him; I gather there was major chemistry here she felt still warranted exploring. But two facts remain: First, had Tayshia been the Bachelor and Ben a female contestant, and Ben was led on in the same way, I think Tayshia would have gotten more heat for this unnecessary push and pull (especially when you consider Ben’s mental health history). Second, I really wish Tayshia hadn’t ended things with, “We missed out on a little bit of time that was monumental.” Even if she didn’t mean to, this sentence once again put the onus on Ben and not on herself, maintaining the narrative that he blew it by not saying the L-word sooner, that it was his mistake. Remember, Tayshia sent Ben home; she can blame it on his lack of an ILY, but it ultimately was her decision. If Tayshia was able to send Ben home with not one, not two, but three men ahead of him, his profession-of-love timelines was definitely not the sole reason for his elimination.

You could argue this onus belonged on Tayshia, or you could argue timing is everything and they were two ships in the night. But, if we’re to believe in Zayshia to the extent that we should (and I do believe in them!), then these men were not so interchangeable that one Fantasy Suite date would have resulted in a different outcome. One thing is for sure: Ben and Tayshia not working out was not any result of Ben’s actions, or lack thereof.

Read this next: Arie and Lauren Luyendyk Are Expecting Twins!

The Bad #4: Looking back over this season, I strongly feel The Powers That Be didn’t properly lay down the foundation of Tayshia’s story. We normally get a good deal of hype around our lead and Tayshia was robbed of that hype. (Or rather, we were robbed of it.) We needed that inaugural chat with Chris Harrison, some sort of segment where she sat down with our host and was properly introduced. I say this because, while we learned early on that Tayshia was divorced, we never really learned until this finale just HOW broken and distrustful it left her. In fact, I’d argue that having had that foundation would have made for a better story arc—a veritable will-she-or-won’t-she-say-‘yes’-to-a-proposal storyline. Having a divorced lead was actually a huge opportunity (another missed opportunity!) for new and uncharted territory for this franchise, in terms of the gravity of an engagement beyond filming, and how differently trust is perceived and earned after it has been broken.

Instead, Tayshia was inserted into this season like an understudy, with no introduction, no refresher, no idea as to what her hangups were or what she specifically sought in a partner. (And again, being divorced, those requirements were specific.) Finally, NOW, after the finale, we know that Tayshia was left with major trust issues after her divorce. We know that, even when things seem perfect, she warily looks for flaws and imagines the worst-case scenario. We know now that she’s extremely guarded, and that effusive words are empty to her if she doesn’t feel intention and sincerity behind them. She wants to be seen and valued for who she is, in all states, whether an “ambitious girl” or a stay-at-home mom. These are all incredibly human aspects to Tayshia and they’re what make her likeable and relatable. My only wish is that we’d known even a fraction of this before the season began, as it would have made her story more compelling and less haphazard feeling. It would have made what she found with Zac even more momentous, because we’d have had some idea as to what she even sought, and why she sought it.

Finally, The Good: I am simply in love with Tayshia and Zac’s love. Their mutual understanding feels lightyears ahead of most final relationships we’ve seen on this show. I love the specificity with which they describe what they share, and how their professions of love are truly about one another, not how their love relates back to themselves. (It’s not “I love her because of how she makes me feel”—it’s “I love her because she is XYZ.”) I was misty-eyed while Zac assured Tayshia how she could know he wouldn’t “run,” tying it back to the nine-year anniversary of his sobriety and how he’s sober IN ORDER to face life and not run from it. This explanation was so nuanced and multi-faceted, while still truly answering her concern. I can say with certainty that this was THE. MOST. moving proposal I have ever seen on this show, and I don’t say this lightly. (Trust me, I have seen a LOT of Bachelor franchise proposals!) I genuinely believe in these two. This was what we endured so many televised ups and downs for, and this is why we still watch this show despite so many shoe-horned narratives and eyeroll-inducing twists: a true love story, one worthy of believing in. We finally got it!

Read this next: The Biggest Bachelor Rumours of 2020

Congratulations to Tayshia and Zac!!!