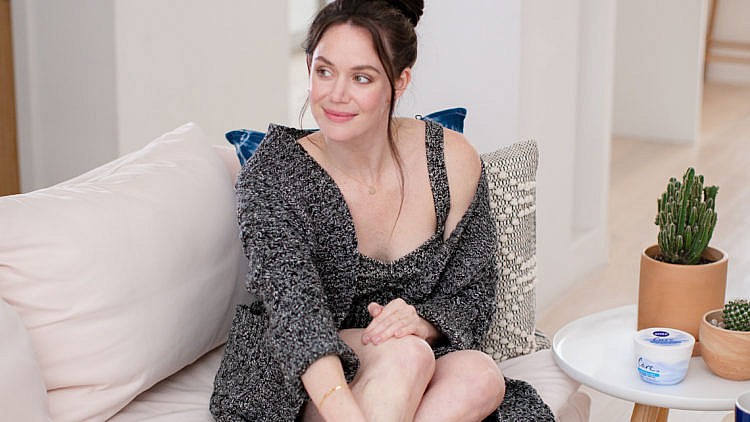 In partnership with Nivea

The last 10 months have been *insert another word for unprecedented* for everyone, even for five-time Olympic medalist Tessa Virtue. In some ways, they’ve been uniquely challenging for someone like Virtue, a 22-year competitive athlete who was just a few months post-retirement when the COVID-19 pandemic hit. No more weeks on end of travel, no more rigorously regimented exercise schedule, no more stage makeup, and a whole big world of opportunity to navigate in this New Normal.

FLARE spoke to the retired skating champion and Nivea’s first Canadian ambassador over Zoom (yes, both parties wore real pants—it was a good day!) about finding joy in lockdown, the ways she has been practicing self-care this year, how her beauty and skincare routine has evolved and how her priorities have shifted since retirement.

You retired from professional skating in fall 2019. What has life been like since then?

“It’s been upside down, but that’s from a more global standpoint. For me personally, the more difficult transition was going from competition to touring. After we wrapped up our Rock the Rink tour last fall, there were so many challenges and goals that I had already set for myself, so it was about navigating the path of, ‘OK, how do I go from being so singularly focused [on skating] to seemingly endless options and ideas and plans?’

“One thing I’ve realized is just how pressure-filled that time was. It was so intense and draining on so many levels that there’s a bit of levity that has been nice to embrace. And having new purposes and goals ahead of me also helps because I’m so task-oriented.”

Tell us about pursuing your MBA—all over Zoom, no less!

“I’m doing my MBA through Smith’s School of Business, associated with Queen’s University. I have a bit of an entrepreneurial spirit so I wanted to make sure that I was learning as much as I possibly could about all facets of the business before I truly pick an avenue and take a run at something.

“Also, as a buffer between sport and real life, it’s good to have a goal that is in the not-so-distant future. May 2022 is graduation so it’s this tangible thing that I can work towards, challenge myself in a way that is not so physical, but rather academic.

“There are about 90 students in the class and they’re such formidable, exceptional humans that have accomplished such amazing things in their own realms. I have to admit, I’m much more nervous participating in our school sessions with 90 people than I was ever performing or competing, probably even at the Olympics (laughs)!”

What’s something that has been bringing you joy in these recent months?

“What has been really special is seeing those smaller, random acts of kindness that people have been showing, whether that’s on social media or just in the neighbourhood. When I was home in London for a time, the sense of community was so strong, whether it was checking in on each other, enjoying a driveway chat, or helping with grocery runs. There have been those who have stepped up and showcased their thoughtfulness and generosity, and that is so beautiful to witness during this tumultuous time.”

What has been something that has been challenging for you in the recent months, especially as Toronto settles into its second lockdown?

“The hardest thing is missing that human touch with the people you’re close to. Oddly enough, I always considered myself as not an affectionate person (laughs) and I’m really missing that now. I have two nieces and one is around 9 months old and I get these photos or videos and see her chunky little arms, and I just want to hold her so badly. I saw my other niece at a great distance in a field one day and it was so hard not to hug her. I feel that kind of sadness and loneliness.”

How have you been practicing self-care during this time?

“This time has made me realize that in ‘busy culture,’ people were deemed successful or living a full life if they were busy, and that was sort of my party line for a long time: People would say ‘How are you doing?’ and I would say ‘Oh, I’m so busy.’ And I really was. I was home maybe one day a month and I was always on the go. But this time has made me stop and reflect and really just sit in my emotions, sit with my feelings. And that has led to prioritizing self-care because I know now that I need those moments. I need the quiet time alone to journal or to reflect on my thoughts.

“In terms of working out, I’ve kind of done a full circle where I really had great departure from it for a bit because I didn’t want to feel like an athlete. And now I feel like, ‘Wow, I’m so grateful to be able to move my body and it feels good.’ That hit of endorphins is healthy. So I’m finding little moments like that throughout the day to treat myself.”

What have you been doing in lockdown when it comes to beauty?

“The nice thing is that I’ve been doing absolutely nothing! (Laughs) Letting my hair air dry, no makeup really, and it’s been so refreshing. The Nivea Micellar is a great cleanser that lets my skin be free and breathe. [I’ll use that] and Nivea moisturizer, and that’s been it.

“It’s been great, especially coming off of tours and competitions where the makeup is so heavy and there’s always a hot iron on my hair. I feel like my priorities have shifted and really, that doesn’t seem important at all anymore.”

Do you feel that your beauty routine has changed in recent months?

“Because I’m not all that patient, I’m pretty low maintenance in general. But in terms of self-care, it’s been about making it more of a purposeful choice and a treat to dry brush and then moisturize, for example, or exfoliate and then use Nivea Care Cream. I do it more purposefully and it feels nice to be intentional about it.”

Is there anything you’re going to be changing about your skincare regimen now that it’s getting colder?

What is keeping you feeling good in your own skin?

“There are a couple things. Moving. Working out. Sometimes it’s just stretching or doing a bit of yoga, whatever it is, just moving my body has been really good. And then also positive messages. It sounds crazy but just accepting whatever state my body is in today, in this moment, just acknowledging it and thanking it. [Thinking], ‘I’m grateful and this is what I’m working with and it’s good enough.’

Especially because we’re in this global health crisis, I think it forces you to be more grateful for what you have.

“I did an event with the singer Jully Black recently and she mentioned something about how important breath is right now and how grateful we can be for it when you think about people who are on ventilators. There’s so much to appreciate just with a simple inhale and exhale. I thought that perspective was really powerful, too.

“There are so many stories around right now that make you think, ‘Gosh, the stresses that seem huge in my relative bubble are not really that important.’ That perspective is key, I think.”

What are some of the most pleasant surprises that you’ve had this year?

“I thought I would be really restless if I wasn’t travelling so much, because that’s what I had grown accustomed to, and I was so surprised by how grounded and comforted I felt at the notion of not even seeing a suitcase for a while. That’s been really, really nice.

“And then, because those times are so fleeting when we do get to connect with family and friends, that joy is magnified. That is so special. Every little tiny moment or phone call seems like a more monumental event and I really try and savour all of those moments.”