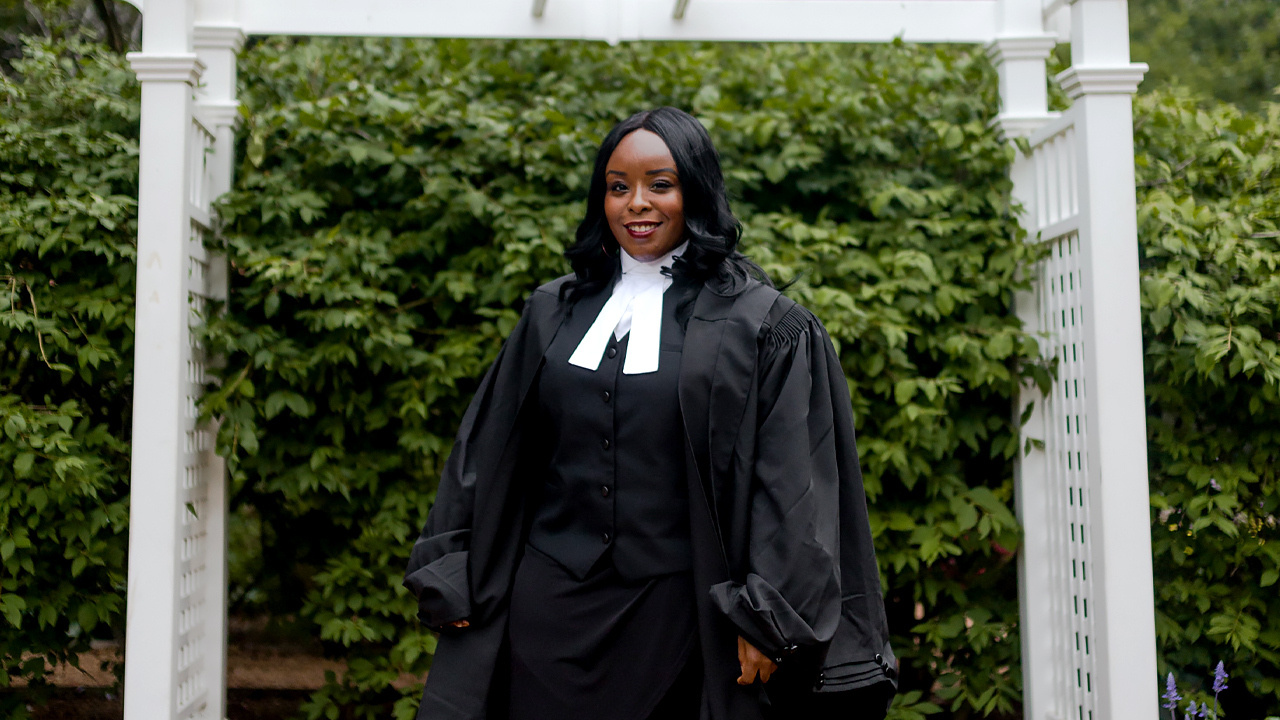 I graduated from law school in 2016 and I was called to the bar in Alberta in July, 2020. The only Black female judge in Alberta, Queen’s Bench Justice Gaylene Kendell, was going to be presiding over my call to the bar. I wanted the experience to be like “Black Lady Courtroom.” I thought, ‘Oh my God, this is going to be real life.’ For me, the timing was really important because everyone was (and is) talking about racism as if it’s a new word, and it’s a good time to interrogate anti-Black racism in law. It was going to be so symbolic to have a Black woman introduce me into the legal profession, especially because to get where I am, it has been Black women mentors, Black women in my family and Black queer folks in my community who have supported me. Plus, it felt relevant because the bar of Alberta is where Violet King—the first Black female lawyer in Canada—was sworn in, in 1954.

Then, just days before my call to the bar, my judge was no longer available; it was a white man instead. I was broken-hearted.

When I was a kid growing up in Toronto in the 1980s, I wanted to be an actress or a lawyer. However, I didn’t grow up seeing lawyers around me, so I didn’t know what a lawyer looked like. My perception of what a lawyer was was informed by the media, movies and TV shows such as Law & Order so I had never seen a Black woman lawyer. My mom sent me to Young People’s Theatre drama school and summer camp to learn how to act, but she also said, “the reality is it will be quite difficult for you to get into acting—maybe you should consider a career as a lawyer.”

My mother thought that I should consider a career in law when I was around the age of seven when I told her that I hated how my voice was not really considered in my parent’s divorce and that I wanted to be a lawyer so that I can advocate for children. She also recently explained that she thought acting would be difficult for me to break into because of systemic anti-Black racism and fatphobia in the entertainment industry.

I was initially drawn to family law because of my parent’s divorce. After studying in France at Sciences Po Lille, I was interested in international law. Upon taking more courses in Equity Studies during my undergrad, I was drawn to criminal law. I’m now interested in workers’ rights, but it still draws upon areas of law that I considered in the past.

Read this next: What Do You Do When Your Dream Career Is Notoriously Racist?

There needs to be intentional work to diversify the legal profession

I went to law school at the University of Ottawa in 2013 when I was 27.  I was cautiously optimistic about arriving in Ottawa for law school because it was the nation’s capital, but I also knew Ottawa was not as diverse as Toronto. I had visited Ottawa about three times before: for Christmas at a family member’s house when I was in high school, another time for my friend’s 21st birthday, and then to see my duplex before moving into it for law school. I had lived away from Toronto before. As mentioned, I lived in France briefly on an academic exchange at Sciences Po Lille/l’Institut d’Études Politique from 2006 to 2007. After completing my Masters at the Ontario Institute for Studies in Education in 2010, I moved to Paris from 2010 to 2011 to work for the Ministère de l’éducation Nationale in the Académie de Versailles as a teaching assistant.

When I arrived in Ottawa in 2013, I was walking in the ByWard Market with my hair in braids and people stared at me with their mouths agape. I think that they were shocked seeing an unapologetically dark-skinned, fat, Black femme walking with her head held high. I was the opposite of what “professional” and “respectable” looks like in a government town. I was not wearing a suit, I did not have straight hair, I am not white and I am not thin. I was hyper-visible in a society that makes me invisible. And when I entered law school, it was pretty much the same experience—lots of being stared at, and not a lot of Black people around me. I was in the English common law program, and I was often the only Black person in my class. It was really challenging for me to find community in law school. I remember on the first day of my criminal law class, this white dude came up to me and asked, “How did you get here? Did you come through the equity stream?” That was my introduction to law school—that I was not supposed to be there.

It was challenging to find community in law school

I have gone to job interviews where white lawyers asked me, “What did you do to get such a strong reference letter?” Once, at a law school graduation party, someone’s boyfriend asked me if I was a law student too or if I was just a plus one like him. I told him that I was a law student, and he said, “Wow, if I knew it could be that easy, maybe I should go to law school too.”

Being a Black queer femme played a role in law school where there was so much pressure on what a lawyer looks like, thinks like, speaks like and acts like under the guise of “professionalism.” I often felt isolated. I would go to OUTlaw, which was the queer organization at school, but it was predominantly white, gay males, and it felt like I didn’t fit.

Read this next: How Post-Secondary Students of Colour Can Feel Safe At School

I was lucky to have a Black woman mentor who was part of the woman lawyer mentorship program in law school. At that time, she was working for the government and is now a judge. She was just amazing because she was able to provide support and guidance on what it’s like to be a Black woman in law. She was there during my call to the bar and it was really great for her to be able to witness that.

I moved to Edmonton to complete my lawyer licensing. They do individual calls to the bar in Alberta, which is unique—they don’t do that in Ontario. In Alberta, it’s very personal; it’s just you, the judge, your articling principal and whoever you want to invite like family and friends. I wanted to have that experience before a Black judge, Justice Gaylene Kendell, and she wasn’t available. It was so devastating. I had chosen her, and then the Law Society just chose someone for me, Justice Michael Lema. But, despite my initial disappointment, he did an incredible job with the ceremony. Followed by a land acknowledgement, he mentioned that there’s an anthology called Truth be Told: An Anthology of Inspirational Stories by Women in the Law, and he said he would send me a copy, and that he wouldn’t be surprised if a future edition had a chapter dedicated to me. But the reality is that Justice Kendell wasn’t available, and there were no other Black judges available—because there weren’t any other Black judges on the Queen’s bench in Alberta.

I don’t think that law schools in general are equipped to provide support for Black students, in terms of applying intersectionality, and the ways in which the schools design the curriculum, staff and support. I don’t feel like I had culturally specific or race-specific support. There was a lot of work and research that I had to do on my own, on top of having to navigate being in a new space, being in my first year of law school and having people ask me how I got there.

Law school curriculum needs to be intersectional and Black people shouldn’t only be brought up in the context of criminal law. Generally, the law is supposed to be seen as neutral, but neutrality is often synonymous with whiteness. I had one lecture in a course about property law where we learned about Henrietta Lacks, whose cells were used for medical research without her consent. But the lecture was not trauma-informed or intersectional, because they were trying to reduce her cells to property without thinking about the context: how Black people have always been and are still seen as property. There’s an institutional responsibility to do better. When I was called to the bar, the judge referenced an essay I wrote about how we need to ground judicial education in intersectional and critical race theory. He said, “I have a deep admiration and respect for all the roads that you’ve traveled.” And he added, “it’s my privilege to preside over your metamorphosis.” Having the space to have conversations about these things means it’s more likely that we’ll have diversity on the bench.

Read this next: The Danger in Alek Minassian’s Autism Defence

There is a long way to go but I’m excited to see changes in leadership within Canada’s legal system. This is the first year that Ryerson’s law school is in existence, and it’s being run by Donna Young, a Black woman. The Black Legal Action Center in Toronto is doing great stuff; they provide free legal services for low-income Black residents of Ontario, and the center is led by a Black woman. The previous president of the Canadian Bar Association was Vivian Salmon, a Black woman, and the current president of the Ontario Bar Association is Charlene Theodore, a Black woman. It is my hope that the Black women in these roles will shift the culture of the legal profession. When Black women and femmes are given the space to lead institutional change without consequence and without being met with staunch resistance, the possibilities [for other Black women in law] are endless.

My experience practicing law since being called to the bar has been exciting. It has been challenging in that it is more difficult to network online, however, I have been able to carve out my own path in the legal profession. I do not work a typical Bay Street job. I am a freelance lawyer, I am a Legal Researcher at a feminist legal clinic, I’m a pro bono lawyer for survivors of domestic violence navigating family law matters, and I’m the Black Legal Mentor-in-Residence at the University of Ottawa Faculty of Law. I have been appointed to the City of Toronto’s Lesbian, Gay, Bisexual, Transgender, Queer and Two-Spirit (LGBTQ2S+) Council Advisory Body which provides advice to City staff and City Council on identified priority issues to support the elimination of barriers and inequities experienced by LGBTQ2S+ communities in accessing City of Toronto programs and services and I am also the Canadian Association of Labour Lawyer’s first-ever National Vice-President of Equity and Anti-Oppression.

I hope that Black women are given the space to be courageous. I want people to know that you don’t need to shrink and hide parts of yourself in order to do the work that you do. For me, it’s a liberating choice to be able to say that I’m a lawyer, and I’m Black and I’m queer.