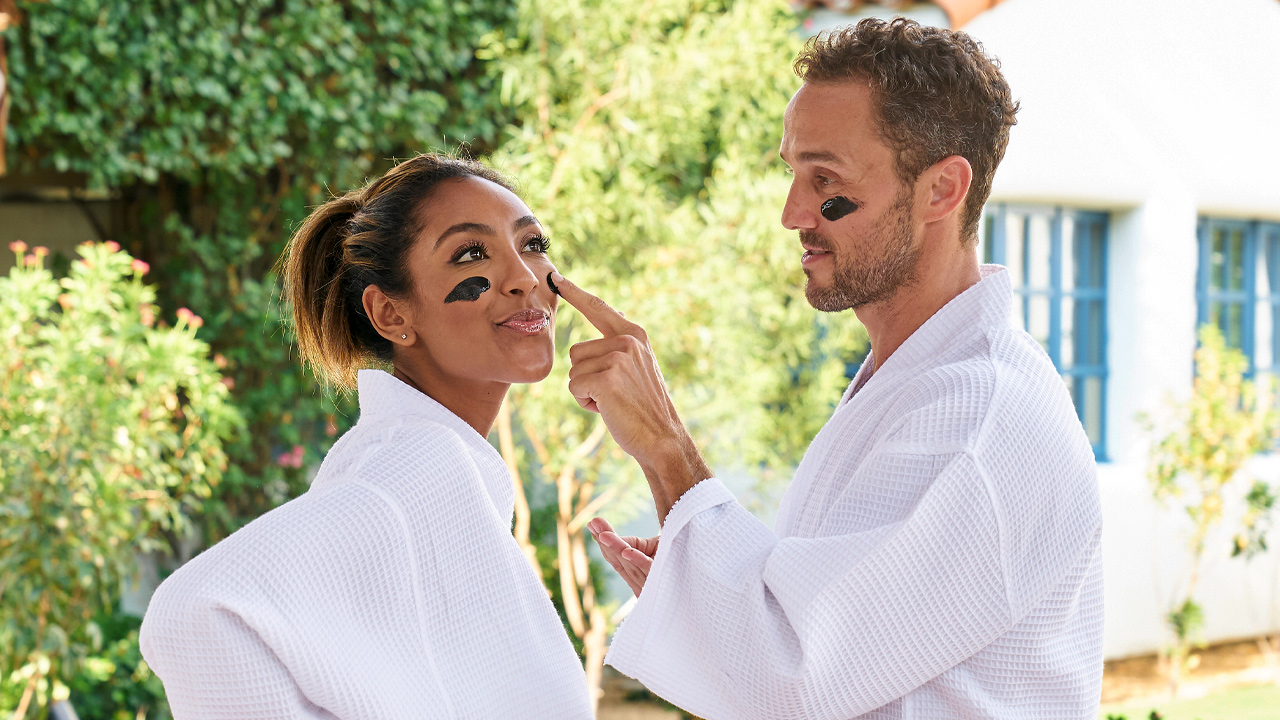 Ahh, Fantasy Suite week. The week where, if a contestant has been waffling about uttering any iteration of “love” or “falling in love,” they’d better start. I didn’t think it was possible to simultaneously put too much and not enough emphasis on the L-word, but this show manages to do just that season after season. “Love” is all-important in the Bachelor sphere. If you don’t say it in the right way and at the right time, your departure can and will be attributed to that, à la Ben (and so many fallen suitors before him). Never mind the compatibility, mutual respect, attraction and emotional support that make a sustainable love story…. Without the L-word, those are meaningless! In this world, everything you share must culminate with a profession of “love” to be taken seriously. Without it, you are wishy-washy, insincere, not ready.

Yet, for every lead who tells more than one contestant he loves her, I have to wonder: Does “love” really mean the same thing if you feel it with multiple people, and if you tell those multiple people? Is there not an argument to be made that prodding for and prompting the L-word, as hard and as fast as possible, ultimately lessens its gravitas? With regards to the Bachelor Bubble, this show has unquestionably cheapened the concept of “love”; it has been printed like money, its value decreased. I don’t know about you, but at this point, I am numb to that word when I watch this show. I for one would like to watch a season where the word was completely outlawed. How would that affect the lead’s decision-making, and how could contestants prove their feelings without relying on the L-word crutch?

Read this next: Bachelor Contestants Fall In Love In Two Months—How Realistic Is That?

To her credit, Tayshia is not that lead who tells multiple contestants she loves them. In fact, refreshingly for this show, our biggest indicator of who might be “winning” this whole thing is that very word. Last night, when Ivan confessed to “falling in love” with Tayshia, she responded with, “I’m falling for you, too.” But when Zac told her he loved her, after having a huge reaction, she exclaimed, “I love you, too!” Based on those scenes alone, I personally would be shocked if Zac wasn’t our eventual “winner,” and I’ve got to give Tayshia credit for cleverly sidestepping an age-old Bachelor trap. She’s playing the player she’s contractually obliged to play, while still making an effort to keep the L-word as special and sacred as possible in an environment that cheapens it at every turn.

But if you’re falling behind on the L-word train, beware. If The Powers That Be get the feeling you’re not quite ready or might better flourish in a less contrived environment, don’t expect a helping hand. They won’t give you space, breathing room or easy, casual dates to naturally explore what could be. Nope, they’ll smother you: Brendan’s absurd Neil Lane date was the best example of production abandoning a perfectly valid but slower-to-develop relationship. On each of their third dates (Really think about that: These were their third dates, and only if you count their Hometowns!), Ivan got the unique experience of breaking a world record, Zac got by far the best date in “exploring” Tayshia using paint and a canvas, and poor Brendan got stuck trying on wedding rings?! (What were they even doing, exactly? Shopping for rings? Simply ogling rings?) Brendan had been vocal about how his divorce affected him, and seemingly on a dime, that narrative went from being something that bonded him with Tayshia, to something that was used against him and Tayshia.

Don’t get me wrong: I believe that, had Brendan really felt confident enough in him and Tayshia, he could have become ready. I also agree with Tayshia that it was better for him to leave now than stick around longer. But this show certainly did him no favours by loading fire logs onto what was still only a delicate flame.

Despite last night’s obvious abandonment of Brendan, I have to admit I am coming around with this season in these final few episodes, and I attribute that to our Bachelorette officially growing into this role. I’ve enjoyed Tayshia for the most part, and last night’s penultimate episode was, in my opinion, her best showing yet.

Read this next: How Many Contestants *Really* Have Sex in The Bachelor Fantasy Suite?

I mentioned in last week’s recap on my blog that in some ways, Tayshia has predominantly remained a mystery. She has occasionally come off a bit cold to me, at times sending men home with little more than a terse “thank you.” She has called some of the guys “hard to read,” but for the most part, I have found her the hardest to read of all. There is an almost distant quality to Tayshia; it’s difficult to imagine her letting anyone even close to her heart. She keeps the reins of her emotions firmly in her tight grip. In more ways than one, she really is the polar opposite of Clare, who is very transparent and emotional.

I’ve often wished Tayshia would let us in, and would share personal thoughts with even a fraction of the gravity of those shared by Ivan, Zac and especially Ben. But while Tayshia doesn’t really tell us much about herself, she has dropped hints. Last night, she told Ivan, “I even, like, cried in front of you. I don’t cry to people.” I found this a fascinating nugget of information to learn about a lead just before her own finale. After all, most leads can (and do) cry with abandon on this show, especially under these high pressure circumstances. It’s all too easy to assume most people in Tayshia’s role would cry freely, as that’s what we’ve always seen. So much suddenly made sense with this revelation: her leaving the room to cry after the guys shared their “self portraits” on that art Group Date, her seeming emotionlessness in sending home so many men. She has called some of the guys guarded, while it’s clear no one is more guarded than she. But last night got me thinking: Perhaps it’s ME who has become too accustomed to waterworks when watching this show. Learning this about Tayshia has made me check myself and my own expectations for how a lead emotes.

Another moment of Tayshia’s that spoke to me last night was her reaction to Zac’s profession of love. Truthfully, his ILY was one of the most moving I can remember on this show. (Hey, it’s The Bachelorette—if you can’t rank ILYs here, where can you? They’ve turned “love” into sport!) However, most leads tend to focus on the L-word itself being uttered, less so on its delivery. Tayshia, meanwhile, was focused on how “intentional, natural and organic” this felt. (Notice how she didn’t say this about how either Bennett or Ben professed the same word—I’m not including Ivan in this list because he only confessed to “falling” in love with her!) I really related to her reaction to this—she wasn’t moved by being told he loved her, it was what he saw in her that caused him to say it. Thankfully, with a lead as guarded as Tayshia, the L-word alone won’t do. With her at the helm, maybe that word won’t lose its meaning after all.

My predictions for the finale are…

I cannot gush enough about Zac. When I watch him, I furiously take notes because he drops gems every time he opens his mouth. His life experience has turned his every observation into a thing of beauty—that moment in his ITM with the word “explore” was simply lovely. He is the only man with whom Tayshia seems to be her goofiest, softest self—he visibly brings it out in her. Their makeout sessions are INSANELY HOT, but they are also in deep simpatico with one another. (I loved when, out of nowhere, Zac said, “Let’s dream” and Tayshia just took off.) Best of all, you get the sense Zac really loves Tayshia. He doesn’t love her as it relates back to him, as is so often the case with “love” on this show. There is no ego attached to his affection for her. You can tell that if Tayshia picked someone else, it would hurt immensely, but he would still a) trust her to make decisions for herself and not say she made some mistake, and b) be happy for her happiness. That is the kind of partner you want by your side in life. In terms of this quest for love, it’s hard to imagine anyone—Ivan or Ben—coming close to touching him.

Read this next: A Guide to the Remaining Men on Tayshia Adams’s Season of The Bachelorette

There’s no question Tayshia and Ivan share something special, and I have really enjoyed watching Ivan warm to the strangeness of this environment, fuelled only by his genuine interest in Tayshia. (We all saw him shift the second Tayshia became Bachelorette.) I enjoy their mutual desire to “take on the world” together; there is a lot of talk about being driven, an ambitious team, about setting and achieving goals together. But to bring things back to that aforementioned control of Tayshia’s, I still see her as Tayshia The Bachelorette with Ivan, versus Tayshia The Woman with Zac, and maintain she doesn’t let go with anyone else the way she does with Zac. I adore Ivan on my screen, but I don’t picture him walking out of this with anything but a broken heart.