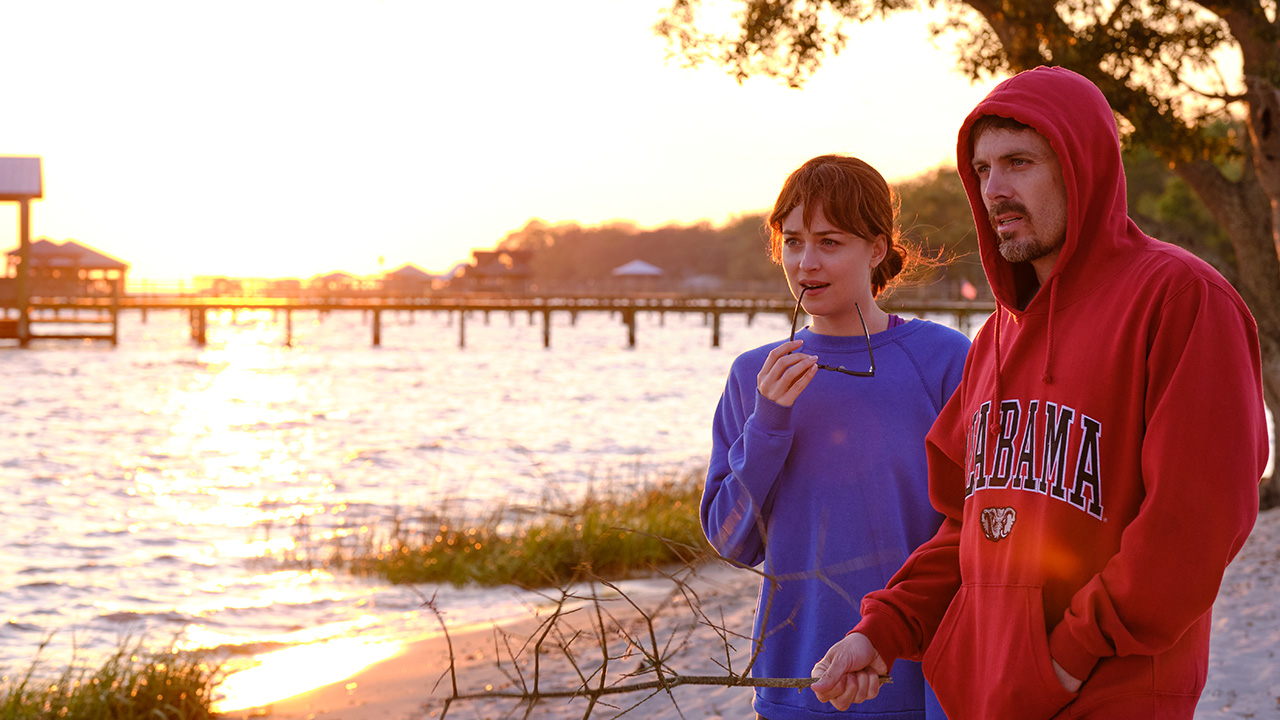 We spoke to Johnson about playing a terminally ill woman, the scene that broke her heart and finding joy in dark times

Comedy isn’t necessarily the first thing that comes to mind when ones thinks of cancer. But it’s this combination of tragedy and humour that drew Dakota Johnson to her latest film, Our Friend. Based on a 2015 Esquire essay The Friend: Love Is Not a Big Enough Word by Matthew Teague, the film follows Johnson’s character Nicole as she battles terminal cancer. Joining her in the fight are her husband Matt (played by Casey Affleck) and their longtime friend Dane (Jason Segel), the latter of whom drops everything in his own life to support the couple and their family as they grapple with the rare highs and immense lows that come with the disease. Dying is not pretty and, as both the film and Teague’s original essay detail, it’s not meant to be. It’s meant to be real.

On the day of the 2021 U.S. presidential inauguration (“What a day,” Johnson says), FLARE spoke with the actor via Zoom about the scene that broke her heart, what brought her joy in 2020 and whether or not we’ll see her in a musical sometime soon. Planning on watching the film? We’d recommend some tissues.

Dakota Johnson was drawn to Our Friend for a specific reason

While it may be hard to imagine comedy existing in a film about cancer, Our Friend doesn’t skimp on the lighter moments in main characters Nicole and Matt’s lives. From Matt’s fainting spells (he passes out when he gets excited or nervous—relatable), to BFF Dane’s penchant for stand-up comedy, there are some great bursts of levity. This is what drew Johnson to the film and the role of Nicole. “I was really drawn to the humour that was specked throughout the script,” she says. “I thought it was extraordinarily genuine to pare such immense tragedy and suffering with levity like that. That’s what real life is like.”

Which makes sense, considering the film is based on the real-life story of the Teagues, an Alabama family who have to face the reality of cancer when matriarch Nicole, a vibrant theatre lover and performer, becomes ill in her mid-thirties. While Johnson says having Matt Teague on set and involved in the development of the script was helpful, as was filming in the Alabama town where the family actually lives, playing a real person like Nicole was daunting. “There’s kind of this added pressure of getting it right,” she says. “But we all sort of relinquished ourselves from that because it was more important to have the relationships and the journey be authentic.”

There’s one scene in particular that broke Johnson’s heart

One of the most poignant moments comes midway through the movie when Nicole and Matt share a moment of marital intimacy, with Matt helping Nicole put cream on her body. By this point in the film, Nicole has been sick for several years; her formerly long, luscious locks shorn to a pixie cut. Nicole looks at the mirror and says “I’m so ugly now” to her husband. *Cue the tears*

It’s a heartbreaking moment, but one that captures the feeling that many people—especially women—talk about when they’re sick: the loss of and dissociation from your body. For Johnson, the scene was as heartbreaking for her to film as it is for audiences to watch.

“I think the idea of a woman who was so vibrant and so sparkly and so talented and just genuinely full of love and colours, to have this really raw realization that she is physically not a person that she used to be is devastating,” Johnson says. “And not being able to do anything about it.” While Johnson says she thinks Nicole was still beautiful in that moment, “to have your beauty and your energy, your body and your vitality, and ultimately your life robbed is just horrible. And it’s such a common disease.”

Read this next: Lili Reinhart Has Arrived

Johnson had a surprising response to singing in the film

Another scene that was tough for Johnson to film, for an entirely different reason, comes near the end of the movie when Nicole is on a stage, singing to an audience. A quick scan of the final credits shows that it is, in fact, Johnson who’s actually singing. (FYI, her voice is gorgeous.)

But while we might assume that actors aren’t prone to stage fright—and may also assume that Johnson, who has bared *a lot* more physically in films like 50 Shades of Grey, would be comfortable in the limelight—we’d be wrong. During a January 19 interview on The Tonight Show Starring Jimmy Fallon, Johnson opened up about filming that scene, revealing that she actually had a panic attack on-set. “Singing in front of people is actually so terrifying for me,” she told Fallon. And despite the fact that the camera isn’t on her for very long, “[when] they hit playback of my vocal recording and called ‘action,’ it was like I had a panic attack that manifested in all the ways that it does, that it can. So I just took off running.”

“It was kind of an afterthought for me,” Johnson told FLARE of having to sing. “I was focusing more on the story.” But, she says, singing and performing were a huge part of Nicole’s life, meaning Johnson realized, as she was prepping, that she herself would have to perform. “I was like, ‘Oh…that’s right. Okay.’” But, despite initial nerves and a sprint around the set, “it ended up being okay,” she says, “I got through [it].”

And now that she’s overcome her initial fears and sang in a film, could we potentially see Johnson singing again in future roles? Or starring in a musical perhaps? Don’t count on it. “I doubt it,” she says with a laugh. “But you never know.”

Read this next: This New Selena Gomez-Produced Romcom Has a Canadian Connection

It can be tough to search for messages of positivity in an emotional film like Our Friend, but ultimately, that’s what Johnson hopes audiences take away from it.”I hope that people feel a sense of unity and perhaps are more inclined to be more compassionate and more focused on little things that bring you joy,” she says.

So, in a year that brought many people loss and hard times, what did Johnson do in 2020 that brought her joy? On top of making a movie during 2020, “I’ve been working on things that I care about, like my production company [TeaTime Productions] and taking care of the people that are closest to me—my family and my loved ones,” she says.

Which is something Our Friend’s Dane could really get behind.